The Persephone Book of Short Stories: Subject for a Sermon by Elizabeth Berridge 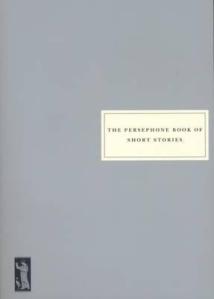 A woman had to add to her usual rules of companion and mother, that of organizer. Naturally this involved sacrifices, loss and pain. It was a struggle all the time, with no medals at the end.

Subject for Sermon is another wartime story in The Persephone Book of Short Stories. The main character of the story is Lady Hayley, an aristocrat. With the war going on Lady Hayley believes that it is up to her to guide the village through this difficult time. Even with her son, John, a soldier, at home on leave Lady Hayley is not the one to back away from her duties! It is her ‘selflessness’ that gives the village rector the subject for his next sermon!

Even though Lady Hayley may have impressed the villagers, I did not find her to be a sympathetic character. What kind of a mother spends her day in the village, rather than at the train station, on the day her son returns home from war? Lady Hayley reasons, “I’ve always said the Red Cross comes first, now’s my chance to prove it.” Surely the village can survive a few days without her ‘guidance’?

However, it is not hard to understand what drove Lady Hayley to insert herself into leading every war activity that took place in the village. She merely wanted to ensure her status in the village will not decline after the war. Knowing what we know now of the eventual decline of British aristocracy, I wish Lady Hayley had listened to her son, who seemed to be well aware that days are numbered for aristocrats like his mother, despite her best efforts. That would have at least brought them together than driving them apart!

← The Misunderstanding by Irène Némirovsky
The Barrowfields by Phillip Lewis →
Follow Red Lips and Bibliomaniacs on WordPress.com