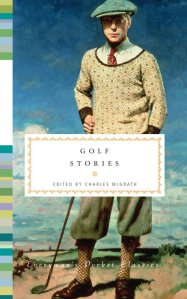 Triumph at Crestwood is taken from Rex Lardner’s golf story anthology Out of the Bunker and Into the Trees which was first published in 1960. The story’s unnamed protagonist is one of the eight golf players taking part in Crestwood club’s sudden-death golf tournament, although he is not that good of a golf player. In previous tournaments, he had always ended up in the bottom of the pile. But this time around Andy, the reigning champion can’t attend the tournament, so the supporters of the protagonist believe he has a good chance of winning!

The protagonist knows his usual playing strategy won’t help him at this tournament. So he tries out a new style – high tension golf playing – and discovers it allows him to play top-notch golf! So excited about his prospect of winning this championship, he comes up with a game plan. He spends days leading up to the championship by putting himself in high-stress situations! Even on the game day itself, he does some bizarre things!

In order not to be overawed by the task that lay ahead and to make sure my tension tanks were full to overflowing when I set foot on the first tee, I evolved the following program which the reader may at sometime find useful:

I set the alarm late, so that I had to rush to get to the club on time.

I shaved with an old blade, managing to cut myself twice.

I woke my wife up and had some word with her about not having coffee ready. She went back to sleep.

There being no time to squeeze orange juice or anything, I shoveled a handful of granulated sugar in my mouth and chewed it while putting my socks.

I put on my shoes in the car while stopping for red lights, possibly causing several other drivers to develop High Tension of their own.

At the tournament, he starts off pretty well, and while his winning streak lasts, it almost feels like his crazy strategy is paying off. But then things go sideways, and for some time it seems unlikely he’ll be able to pull this off until one unimaginably incredible shot at the 18th hole proves to everyone that lady luck is on his side! That shot which displays the protagonist’s “nerve and skill” wins him the Kingston Trophy, and brings the story to an end.

Apparently, Rex Lardner wrote many golf stories during his life although he never played much golf. According to Rex, people played golf “to destroy themselves.” Even though the story is humorous, one can’t ignore that the protagonist was driving himself crazy with his high tension golf playing. So while reading Triumph at Crestwood, I wondered if Rex was hinting at his belief! 😀

← The Ravenmaster: My Life with the Ravens at the Tower of London by Christopher Skaife
A Man Called Ove by Fredrik Backman (Book Vs. Movie) →
Follow Red Lips and Bibliomaniacs on WordPress.com