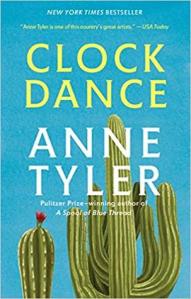 Willa Drake has always been a passive participant in her own life – she has let others call shots for her, and watch her life pass her by. But now at the age of 61, Willa has a chance to change all that – when Willa receives a call from a total stranger giving her news of a shooting incident involving her elder son’s ex-girlfriend, Denise, Willa doesn’t think twice before flying across the country to Baltimore to take care of her and her young child.

Although it feels bizarre to imagine Willa doing this huge favour to Denise when she hadn’t even met her in person before, a part of me could also understand why Willa would do that. Willa is a nurturer, but her nest has been empty-ish for a while now. Her children are all grown and live far away from her, and even her husband doesn’t need her much. So for the first time in a long time, this call makes Willa feel needed, and among her new Baltimore neighbours, Willa finds purpose in life.

If you have followed Anne Tyler’s writing career, you might know that she is famous for basing her stories on ordinary people, and a slice of life is what she presents to us in Clock Dance. Be it the minutiae of everyday lives of her characters, or conflicts they face (Willa’s family members aren’t thrilled about their ever so predictable mother/ wife uprooting her life on a whim to help almost-a-stranger) Tyler is capable of turning commonplace experiences into charming pieces of writing. In another writer’s hands, the familiar could run the risk of becoming boring, but not with Tyler.

The only other book by Tyler I had read before is A Spool of Blue Thread which was both shortlisted for Women’s Prize for Fiction and Man Booker awards. While I didn’t end up loving Clock Dance as much as I loved A Spool of Blue Thread – Clock Dance‘s conclusion felt abrupt to me – it is still a book I’d recommend to Tyler’s fans. However, if you are new to her writing, I think her earlier novels such as Dinner at the Homesick Restaurant and The Accidental Tourist which were Pulitzer Prize finalists, or even A Spool of Blue Thread might offer a better starting point. 3 stars.

Note: Many thanks to Vintage for sending me a review copy of Clock Dance.