When the British Library Science Fiction Classics series first came out, I planned on going through them in the order they get published. But ever since I received The End of the World and Other Catastrophes, I’ve been itching to read it. With catastrophic disasters striking more often nowadays, and the increase in the likelihood of human civilization collapsing before the end of the century, I was curious to know how classic SciFi authors imagined the world’s destruction.

In Helen Sutherland’s The End of The World (1930), the story’s unnamed narrator sees the aftermath of World War III in a dream. In this post-war world, women have become empowered – they have entered the workforce, become rulers’ of nations (I’m still amazed by how futuristic this must have been pre-WWII!). But they can’t contain the disaster of the world’s dwindling male population. When one calamity after another strike and kill men, women do everything in their power to boost the male population. However, all their efforts fail, and with the death of the Last Man, comes the End of the World.

The next three stories in the collection have a similar theme; they all look at doomsday scenarios that will wipe-out London as we know it from the face of the earth.

Written during the glory days of the British Empire, C. J. Cutcliffe Hyne’s London’s Danger (1896) imagines a catastrophe that would lead to its fall. Methuen, the story’s protagonist, is heading to a wedding party with Gerard, the groom. They are supposed to meet Vivian, the bride at Queen’s Gate, London, but with a fire sweeping through London, getting there and then escaping the city proves to be a deadly affair. This inferno, aided by an ongoing gale, and a previous blizzard that had frozen up the city’s water sources, kills half a million people and brings London to its knees within hours. It’s a brilliant portrayal of cataclysmic events, although I was amused by Methuen’s disappointment in other nations who don’t waste time to knock England off her pedestal by seizing the opportunity to invade British colonies in the aftermath of the fire!

Herbert C. Ridout’s The Freezing of London (1909) is a classic Mad Scientist tale. Angered by the British Government’s refusal to accept his novel weapon of mass destruction, the story’s megalomaniac decides to release it in London and thereby teach everyone a lesson.

In Days of Darkness (1927) by Owen Oliver, the absence of light that engulfs the world creates havoc in London. This is the only story in the collection that I didn’t enjoy – it’s a bit of a sappy love story, and the near-end scenario featured here is one I found hard to imagine.

Robert Barr’s Within an Ace of the End of the World (1900) imagines a time where the world food stock is depleting rapidly as a result of growing populations. One scientist’s findings seem like the perfect solution to this problem – he proposes drawing nitrogen from the atmosphere to create artificial food, thereby eradicating world hunger once and for all. This idea gains immense traction among wealthy investors, leading to the formation of Great Food Corporation that handles the world’s food supply, and for a couple of years, everything looks great until people start falling victim to oxygen intoxication.

Set in 2951, John Ames Mitchell’s The Last American (1889) is about a Parisian naval expedition group that rediscovers America. Climate change that resulted in chaotic weather in the 1800s had led to the extinction of American civilization, so when the group arrive in New York, it is a desolate wasteland. Mitchell’s prose becomes very satirical as the expedition makes their way to Washington DC on foot – they mistake a native American sculpture to be a “Wooden God” Americans worshiped, and there are a few jabs directed at American values such as capitalism. All in all, this is a humorous story, even though the fun ends the moment Parisians pick a fight with the last American standing.

The Great Crellin Comet (1897) by George Griffith is one of my favorites in the collection as it ends on a happy note. The earth is endangered by an incoming giant comet, and scientists have thirteen months to devise a strategy to avert the disaster. In this moment of crisis, the world unites in concern, and the planet is saved by a young professor who fires a missile at the comet’s dense nucleus as it heads towards the earth. The Great Crellin Comet is not only a brilliant tale, but it is also significant as it was the first story to use the T-10 Seconds Countdown for space launch (a couple of decades before NASA!). 😀

We meet the collection’s second mad scientist in Warwick Deeping’s The Madness of Professor Pye (1934). Its titular character is a loner living in a remote laboratory in Surrey, England. A lifetime of disappointing experiences with the opposite sex and a mentor who stole Pye’s research to further his career have made Pye misanthropic. So when Pye isolates “On,” a particle small than an atom that could silently cause annihilation, he decides to use its powers to get back at humanity.

Created He Them (1955) by Alice Eleanor Jones imagines a post-apocalyptic world where humanity is suffering from exposure to nuclear radiation. By a twist in genetics, only a few couples are capable of giving birth to children without defects. So the societal need for healthy children has forced such couples to stay married, even when the unions are unhappy ones. 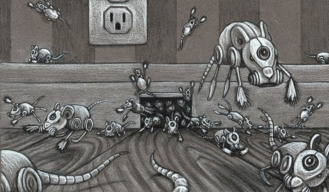 The End of the World and Other Catastrophes ends with There Will Come Soft Rains (1950) by Ray Bradbury, another favorite of mine. The title of this story comes from Sara Teasdale’s poem of the same name, which imagines a world where the human race has gone extinct as a result of a war. Staying true to Teasdale’s poem, Bradbury’s story imagines a nuclear holocaust – humans have been wiped out, and an automated house in California is all that’s left standing. Despite its owners being dead, the house keeps up with its routine work – there is breakfast cooking, mechanical mice running around cleaning up the place – drawing startling parallels to human lives. So when an accidental fire begins in the kitchen and spread through the house destroying it, I felt a pang of sadness.

All the stories included in The End of the World and Other Catastrophes are good three-stars-or-above stories, so this is a solid collection if you are looking for apocalyptic tales. Not many of the stories end on a hopeful note, and some feel oddly realistic serving as reminders that we must get our act together when it comes to climate change crisis before it’s too late.

Note: Many thanks to British Library Publishing for sending me a review copy of The End of the World and Other Catastrophes.

** You can buy a copy of The End of the World and Other Catastrophes here on Book Depository with free shipping.

← 29 Seconds by T. M. Logan
My Time Among the Whites: Notes from an Unfinished Education by Jennine Capo Crucet →
Follow Red Lips and Bibliomaniacs on WordPress.com