The Man with Six Senses by Muriel Jaeger 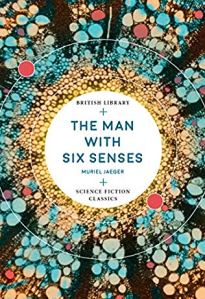 Michael Bristowe, the novel’s titular character, is no ordinary man. He has a keen sixth sense that has enabled him to recognize things in his surroundings without seeing/ touching, and to him, this ability has been a curse until Hilda, a brilliant, young woman took an interest in his future. Hilda, one of the first women to graduate from Oxford University (similar to the author!), sees what Michael’s extrasensory power could mean for humanity from an evolutionary perspective. She is adamant that others perceive what she sees in Michael, however, she faces an uphill battle because people are quick to dismiss Michael as another dowser!

Unlike most sci-fi novels I’ve read, The Man with Six Senses is a meditation on the human psyche, which begs the question if a “superior strain” can be construed as a gift. Jaeger’s characterization of Michael is often sympathetic – he is portrayed as a temperamental individual, who is frustrated and depressed by the society’s inability to understand him. And for me, this exploration was the best part of the novel as I remained largely unimpressed by its (loveless) romantic plot-line – Hilda is pursued by Ralph Standring, the novel’s narrator and an upper-class snob, who considers his “natural mate’s” infatuation with Michael a waste of time and energy!

My copy of The Man with Six Senses, an edition by British Library Science Fiction Classics series, concludes with an excellent Afterword titled Muriel Jaeger’s Educated Woman and the New Nativity Narrative taken from Susan J. Leonardi’s Dangerous by Degrees: Women at Oxford and the Somerville College Novelists. This was such a fascinating read that helped me appreciate the novel more. Apart from the explanations of the novel’s allusions to Christian myths (which I was oblivious to), it also dissects Ralph Standring’s startling misogyny that becomes apparent under the guise of common sense, as he attempts to coax Hilda into marrying him.

Note: Many thanks to British Library Publishing for sending me a review copy of The Man with Six Senses.

** You can buy a copy of The Man with Six Senses here on Book Depository with free shipping.

← Three Tigers, One Mountain: A Journey Through the Bitter History and Current Conflicts of China, Korea, and Japan by Michael Booth
Master Class by Christina Dalcher →
Follow Red Lips and Bibliomaniacs on WordPress.com